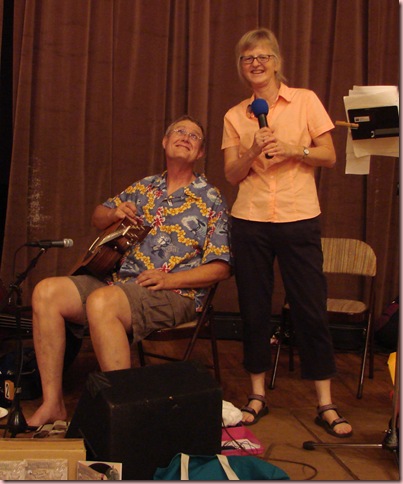 I don’t remember exactly when I met the Privy Tippers or the first conversation I had with each of them. I do have vivid memories of interacting with each as the years passed. I must have encountered them at the very first Dance in the Desert in 1995 when Wild Asparagus kicked off the marvelous music and dance weekend set deep in the Sonoran desert. I do know that I loved the Privy Tippers’ rhythms, loved their humor, loved their quirkiness. I came to love them all, both on and off the stage.

We had numerous gigs together—in Flagstaff, Tucson, Prescott, New Mexico. I thrived on the Tippers’ energy and utter commitment to enhancing the dancers’ joy. They said I was fun. Craig Tinney, the Tippers’ guitarist, called me “Sunshine.” Jerry Ray Weinert, the bassist, honored me by asking me to officiate at his wedding to Marni Dittmar. Dave Firestine, mandolin-maniac, learned new tunes for me just because I said they’d be good dance tunes. Jacquie Wohl (Craig’s wife) and I were both lawyers; we had fun debating issues of justice and conscience. Before each gig I would bake for the band (even carrying goodies onto the plane). Eventually, they would play one tune, then exclaim in unison, “We’re starving. What did you bring us?” I created some very musical and loveable monsters.

At every Dance in the Desert camp that I attended, I would dance with each of the Tippers before the weekend ended. That’s what made them such a great dance band—they all played AND danced. They “got” how music and dance fit together in a wild, synergistic heap.

In the fall of 2004 the Tippers and I were hired to be the talent for New Mexico’s Boo Camp in the beautiful Jemez Valley. There we nestled among radiant yellow cottonwoods along the raging Jemez River. 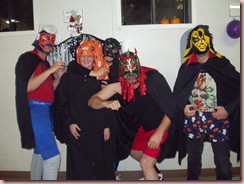 We rocked the dance hall. We dressed up. We did a wedding. Mark and I fed the band before the gig, then Craig drove up with me. That was my first long stretch of time with him, talking about hydrology issues and New Mexico’s water use. He was horrified to discover new development along Highway 550; he said there wasn’t enough water to sustain it. It was the first time I ever heard him rail.

Our paths continued to cross in the folk world after that, with more gigs and camps. Over Memorial Day, 2009 weekend, the Privy Tippers were hired, along with Bag O’Tricks from Seattle, to be the guest talent at New Mexico’s annual Folkmadness Music and Dance Camp. I admit, I meddled a little to make that happen. I thought it was time for both bands to have a wider audience in New Mexico. It worked out fine–both bands were wildly popular, and the campers remarked at how wonderful it was that the Tippers stayed up until 2 in the morning to jam with the locals attendees. Jacquie and Craig were so enthralled with the well-organized camp that they vowed to return in 2010 as campers.

In September 2009 I headed to Tucson for my friend Jean’s 90th birthday. After the party, Jacquie picked me up and took me to their home before our gig for Tucson’s contra dance. She, Craig and I made dinner, then went to the dance hall. Dave was out of town, so Dan Levenson and his wife Jennifer filled in. I had the luxury that night of throwing out the entire dance program I had planned on the airplane. The dancers were so skilled that I called dance-camp-challenging dances the entire night. It was so much fun, and I made a few videos of the band and dancers: Privy Tippers Rock Tucson Contra Dance

The next morning Craig took me hiking in the foothills where we saw a sun-drenched deer and quail. We had heart-to-heart talks about karma and nature and music and dance and caretaking and family and one’s inner psyches. We bought bread at Craig’s favorite bread place, then we joined Jerry Ray and Marni for a birthday brunch. Jacquie took me to the airport. That was the last time I saw Craig.

Two months later he had a motorcycle accident that left him quadriplegic. His brain and spirit survived, intact. I can only faintly fathom the profound transition from a physical life to a cerebral life, of not being able to shoo a fly from one’s face, breathe on one’s own, play guitar, hug one’s loved ones. But Craig took the plunge, did his surgeries, started rehab, moved to Craig Hospital outside Denver, thrived on the care and support and cards and jokes of family, friends, musicians and hospital staff. He kept his sense of humor, learned to “sip and puff” his wheelchair around. He must have had some dark moments, perhaps he wondered if it was all worth it. During the course of his treatment and rehab, he learned how loved he and Jacquie were, in the outpouring of hope and well-wishes from around the country posted on their CaringBridge pages. Hundreds of us collectively willed a different, better outcome. Hundreds of us failed to help Craig move even a finger. Goodness knows, we all tried our best. But it was not to be.

How delighted Craig and Jacquie were to return home to Tucson, renovate their home, see friends, eat their favorite foods, settle into the new life the universe sent their way. A multitude of friends and family attended the benefit for Craig and Jacquie in Tucson on June 13, singing and dancing and jamming and celebrating the wondrous spirits of Craig and Jacquie. They posted an entry on their CaringBridge page:

Thank you a million times to all of our friends who organized the Celebration of Friends and who worked for months to see that the event came to fruition.  It was wonderful, attended by hundreds of friends! Such great feelings, great music, great food,  great jamming, and great friends! Craig was there all day, greeting people he had not seen in months, and in come cases, years.  He was energized by the experience.  We both hope to see more of our friends when we can spend more time with everyone.  It was impossible to walk more than a foot without being stopped and greeted. Will write more later and post pix of the event. Just can’t say thank you enough.
Jacquie & Craig

Jacquie had a birthday on June 26, a big birthday. But Craig went into the hospital that day with pneumonia. He recovered quickly and was sent home on Monday, June 28. Tuesday morn Jacquie sent me an email that Craig had died in his sleep in the wee hours of the morning, Tuesday, June 29, 2010. She wrote:

Craig was hospitalized on Saturday for pneumonia.  He improved rapidly and came home yesterday afternoon.  Craig was very happy to be home and had a wonderful dinner of chile rellenos (brought by our friends Liz and Russ) and napolitos (made by Ariel from prickly pear cactus from our backyard) with our family.  He gave me a birthday present and wonderful birthday card and fell asleep.  When I got up at 4 am to turn him, I found that Craig had passed away in his sleep.  He loved all of his friends and so greatly appreciated the celebration that you all held for him 2 weekends ago.  Craig was continually amazed by the responses on Caringbridge.  He loved his daughters, his home, his friends, his community and his music.  Thank you all so much for making these last several months so meaningful for Craig.

I cried. I tried not to. I could kind of hear Craig saying, “Aw, Sunshine, don’t be sad.” But I cried. The world is diminished now that Craig has left this earthly realm. He was kind, he was smart, he was funny, he was politically correct (in my opinion), he was passionate, he was understated, he had a good soul. He was a damn fine musician. He adored life, Jacquie, his girls Ariel and Leah, music, and dance. He loved the folk community and his place in it. He was fully present and gleeful among his friends, all of whom he made feel as if they were the bee’s knees. He believed in the goodness of humanity, even when humanity sometimes didn’t deserve his belief. He deserved a better fate. He deserved many more years among us.

This morning while walking the dog I earnestly looked for Craig, for some sign that he was out and about and having fun. Would I see a ghostly image of him floating and playing guitar? Or dancing with a cloud? Would our local roadrunner appear with a message from Craig? Would I hear his voice in the breeze or the rustling of the trees? He wasn’t here, not yet, at least. He probably has a lot of travelling to do in Arizona first, before he makes his way to New Mexico and points beyond.

He may be physically gone, but his essence will live in our hearts and minds and spirits for the rest of our lives. Craig Tinney had true generosity of heart, the greatest accomplishment any of us can hope to achieve.

Information on Craig’s memorial on July 5 is at: Craig’s Obituary