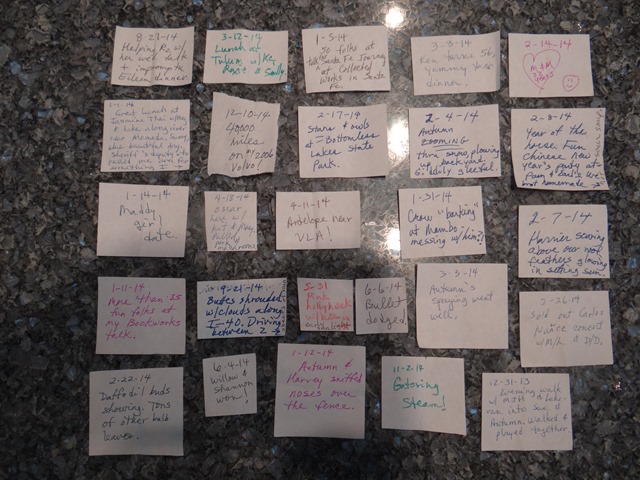 I kept a wonder jar in 2014, little scraps of paper pushed through a slot into a plastic container. Each one contained an event or image or fleeting moment of beauty, joy, or memory. On the last day of the year, I reviewed the scraps with Mark and our friends Ken and Benita. Benita was fascinated by my mostly mundane captures, and she helped me distill my entire year into four words: people, nature, food, dogs. That could be the end of this blog entry, but my friend Kris asked me to pen a holiday letter for 2014.

On January 4, a little dog named Autumn came over for a play date. We had adopted her in November 2013, but Mark’s allergies forced us (heartbreakingly) to return her. We kept running into her in the neighborhood with her foster mom Sue K. Autumn has not yet gone home from her play date, and her one-year anniversary with us just passed. Mark has been managing his allergies. And we are now a two-dog household. We have the dog beds and stuffed toys to prove it. Luke tolerates Autumn and occasionally engages her in play. Both dogs love to camp and hike, and Mark and I took five camping trips with them this past year, all within New Mexico for a change. 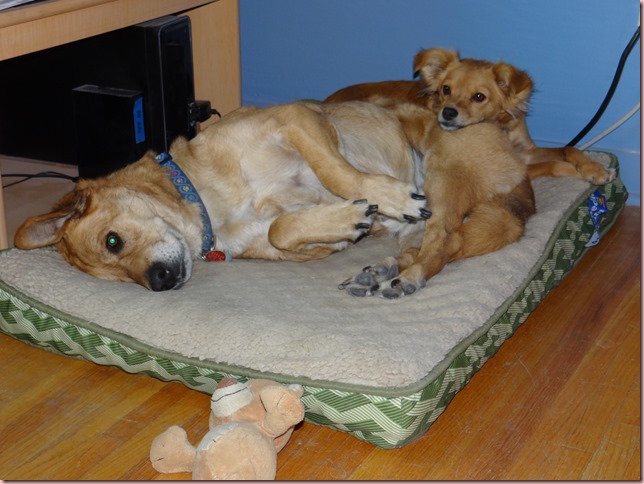 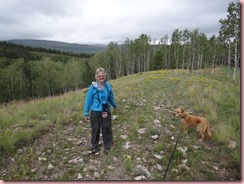 My college friend Helen visited us in January, and Autumn approved of her.  Helen and I spent a few nights at Ojo Caliente in northern New Mexico, soaking in the mineral springs, plus hiking and bird-watching at Bosque del Apache National Wildlife Refuge, one of my favorite spots in the state. 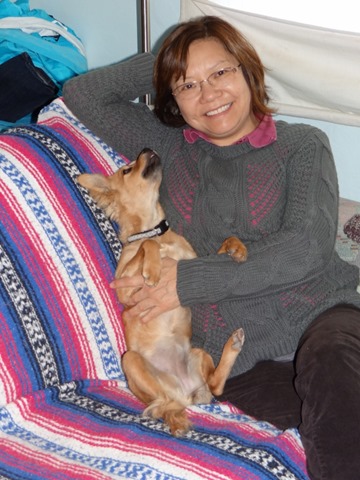 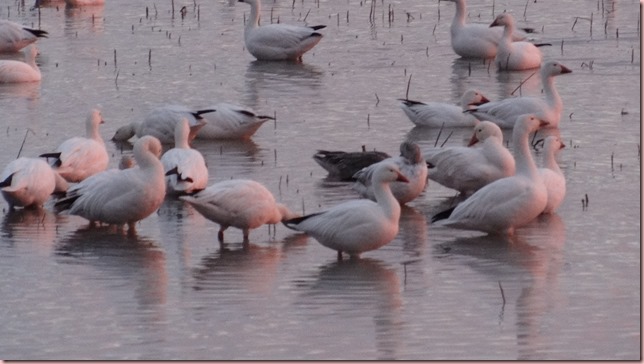 In March I headed to Memphis to hang out with high school friends Roxie, Kathy and Sally. It was my first time back since my mom died. 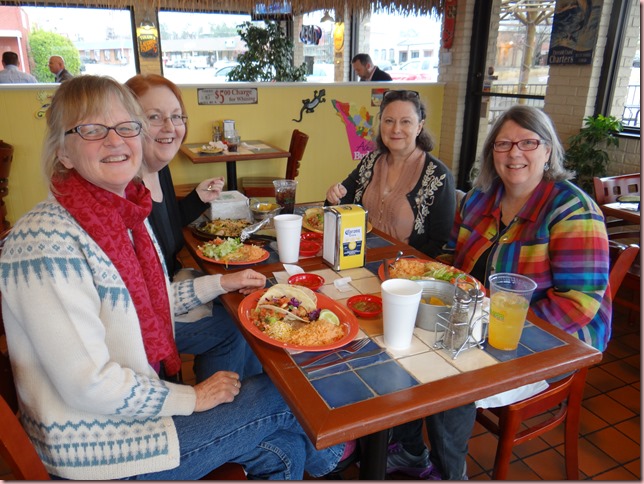 In May Mark and I flew to San Francisco to visit his brother Dan and wife Sharon. We hadn’t seen them in 18 years. We had a fine time, walking, dining, visiting Golden Gate park, admiring myriad murals, and hanging out, talking and laughing. I especially enjoyed watching the piles of seals at Fisherman’s Wharf and experiencing how many ways one could travel without a car. 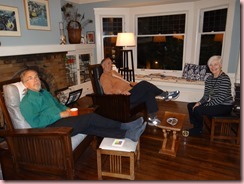 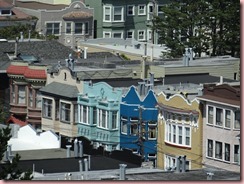 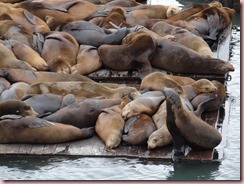 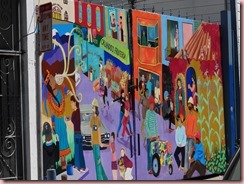 In June I served as a presiding judge for the primary election. It was a grueling 16-hour day, but all our numbers matched at the end of the night. And my former student Willow won a second term as probate judge. My other friend Shannon was elected probate judge for Santa Fe County, proving that, every once in awhile, merit is rewarded. Then Mark and I spent a week at the Cruces Basin Wilderness with friends Melissa and Lew, camping in high aspen country beside a lake with one resident osprey. We hiked, hung out, cooked together and played hearts. Mark and I went back there in August for another week, camping in a different spot, which we had to ourselves the entire time. The trails were humanless too, and one day we encountered a herd of elk dashing through the forest and across the trail we were on. The dogs were suitably quiet and seemed as rapt as we were.

We did a bunch of work on the house this past year, upgrading both bathrooms, then adding a 250 square foot addition to the back. We now have a large bedroom and bath with walk-in shower. My office got bigger too and has a handcrafted Murphy bed for guests. After 27 years, guests no longer have to sleep on the pull-out sofa in Mark’s office. They’ll have a large, light-filled, comfortable airy space. Two “before and after” shots are here, but I’ve yet to cull the 100’s of photos I took during the 12 1/2 week project. We made it through with zero tears or fights, and for that we are grateful. 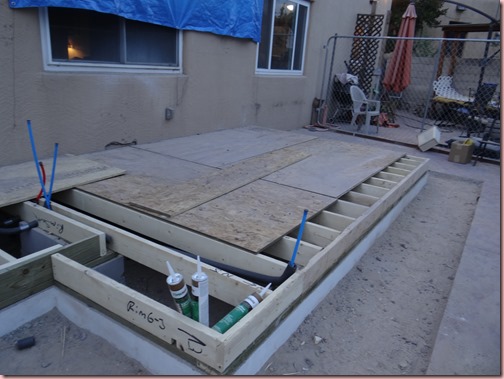 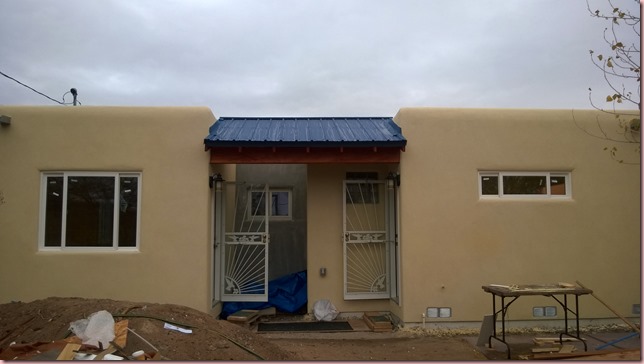 I turned the big 6-0 in 2014 and managed to milk that for several events—a camping trip with Mark and dogs north of Santa Fe, lots of dinners and lunches with friends, and dancing with the folk community. We had an especially divine shared birthday dinner at Seasons with our friends Kris and Darcy. I also did a solo driving trip to the north rim of the Grand Canyon to meet my college friend Ruslyn and her New Hampshire book club. My other best friend from college Susan Robinson’s mom died at age 98 while I was en route, so there was some sadness too. Rusti, her friends and I had fun hiking and dining together, and one night Ruslyn and I laid on my car hood in the pitch dark watching zillions of stars and the Milky Way twinkle in the sky, as elk munched grass nearby. A magical moment that certainly went into the wonder jar.

In October I called a dance weekend called Boo Camp in Jemez Springs, NM with a fun band Steam! It was my first weekend calling gig in awhile, and a doctor friend who attended said it was the first time since my mom died that I seemed genuinely relaxed and joyful. Although I miss her daily, the raw grief has subsided. I was able to help my Albuquerque friend Meg with the final weeks of her dad’s life in November. It seems to be a time when many parents are leaving in their 80’s and 90’s. Yet, my dad died of ALS 38+ years ago, and Mark’s mom died of cancer 30 years ago. Time marches on. Some days we cringe and duck. Others we gather the light and joy and seize the day.

Mark and I finished our house project just before Xmas and hosted friends Kit and Mary for Xmas dinner. When their Schnauzer Oscar wasn’t humping poor Luke, it was a delightful event that we share each year. Then in a perfect segue to the year’s end, Ken and Benita joined us for New Year’s Eve and the unveiling of the wonder jar. It really HAS been a year of wonder, discovery, beauty. But, as Benita summed up my life…a year of people, dogs, nature and food. If each year is as full and joyful, it will be a life well-lived. 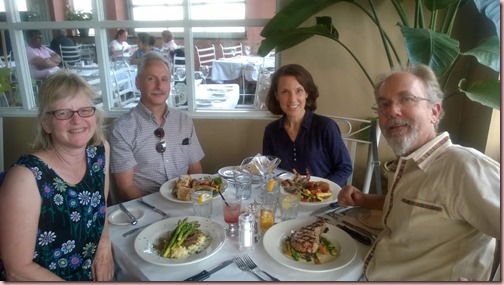 Thanks, Kris, for helping me to realize this. 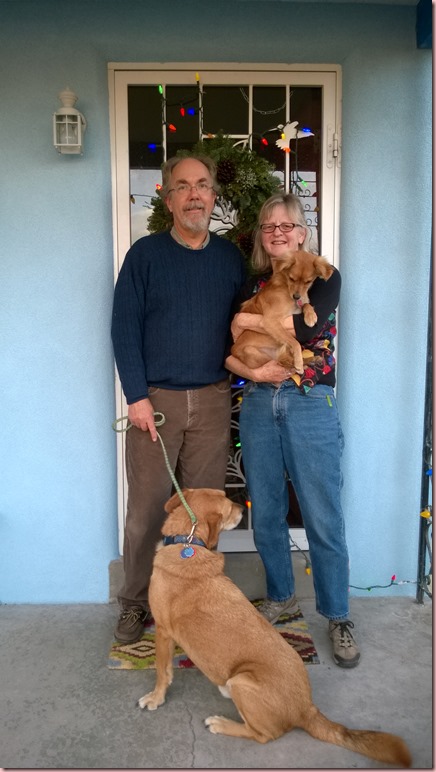 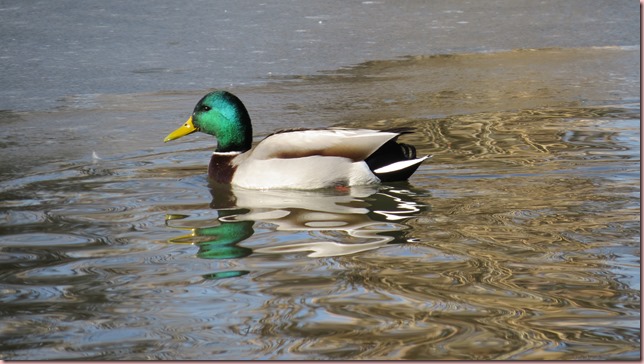