Dear Family and Friends, Happy Holidays and a Healthy 2012 to All !! 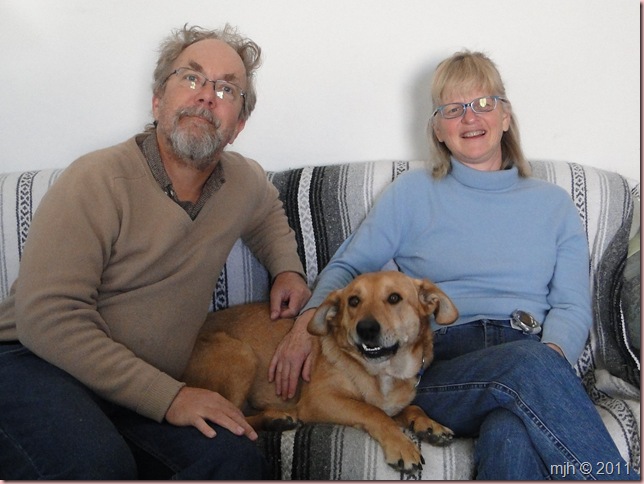 I did not post a holiday letter in 2009 or 2010. Both were filled with sorrow, death, and tragedy, and I did not want to sadden folks during the holiday season. Just so you won’t worry too much (and some of you know much of this), in 2009, my car was totaled, back injured, our dog Lucky died, AZ friend Craig had motorcycle wreck and became quadriplegic, and my aunt’s cancer spread to her brain.

In 2010 my aunt died as I was flying to see her on Valentine’s Day. Mark, 6 friends and I took a birding trip to Guatemala, we adopted new rescue dog Luke (a bassadorable, ½ basset hound, ½ Labrador), I spent months settling my aunt’s estate, making trips to FL to clear her house of 70 years’ of possessions and have a memorial. Kathleen (our longtime friend whom Mark and I helped for 25 years) died at age 94, my friend Craig died of complications from his quadriplegia, I listed my aunt’s FL house for sale, I was term-limited-out of my judge job, my fabulous former student Willow won an election to succeed me (although her opponent, a totally unqualified, retired nurse with zero law or probate experience, got 87,000 votes), and  right before Thanksgiving vandals in FL pumped 16,000 gallons of water inside my aunt’s house, flooding the entire interior. Just before Xmas the insurance company denied my flood claim. The county made a nice farewell video for me as my judge job ended, and there were several farewell events:

I know that life is a combo of good and evil, joy and sorrow, fun and work, gratitude and resentment, yin and yang. Thankfully, I can offer mostly good stories for 2011.

I entered 2011 without the job that I had loved for 10 years. And yet I believe in term limits. I had planned to take 2011 as a sabbatical to figure out what was next. Instead I spent much of January fighting with the FL insurance company, which finally allowed the flood claim. I travelled to see my friend Laura in southern NM the end of January, a solo girls’ trip, and we had fun hiking and dancing there with friends Lonnie and Julie (although Lonnie made me call part of the January dance in Las Cruces). Also drove to Tucson to stay with Jacquie, my fiddler friend and widow of Craig. We had a wonderful time hiking, dancing, eating and laughing. I got back to NM just in time for a visit from college friend Rusti-Ruslyn, who came to NM for adventure and relaxation. We rode the train to Santa Fe, saw the musical WICKED, hiked, ate and laughed. Good therapy to get me through the first month of missing my beloved court and staff.

Things got easier in February, when Mark and I committed to hiking at least once a week. One day we were walking down by the Rio Grande and saw a peregrine falcon eating a small bird in a treetop. The day was sunny and blue, and I turned to Mark and said, “This beats working!” for the first time since my job ended. Also in February, three friends and I drove up to CO for a dance weekend, my first since the car wreck. I danced every day for four days, something I’d not tried to do since the accident. Also saw a bobcat in the snow late one night driving back to the cabin, so close we could see tufts of fur between his paws, and that was the highlight of the weekend, despite the fabulous food, dancing, music and learning to play cribbage.

Mark and I visited my mom in TN in March, which was delightful—tons of flowers blooming and a giant full moon rising near her apartment one night. We also lunched with my longest-time friend (almost 50 years) Roxie and hubby Tommy in Jackson, TN, and stayed with our friend Susan Kevra one night in Nashville. I thought I had sold the FL house in March, but the sale fell through when mold was found all over the house. This triggered another fight with the insurance company about who was responsible for mold cleanup, and eventually they paid for that too, but not without first making my life miserable for months.

Our Maine friends Pam and Gary visited in April, and we enjoyed our eating tour of Albuquerque. Also, I visited college friend Susan in north FL in April and canoed with alligators nearby 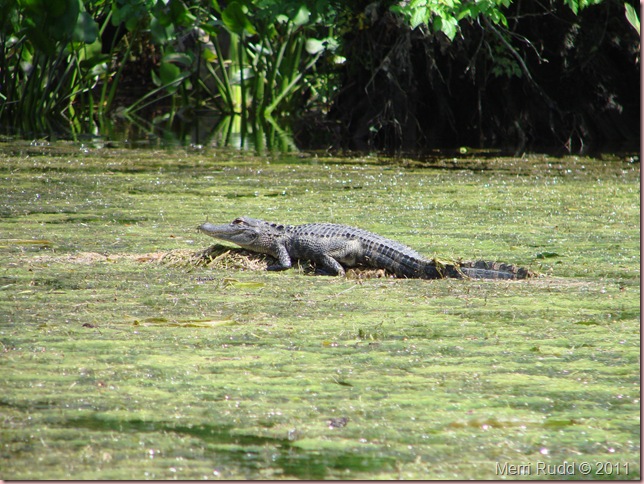 (Susan became a grandma in March!!!), had the mold cleaned up in the FL house, and the house sold again with a May closing. In early May I made a trip to NC to see my friend Ann, and then a 10-day trip to FL to do house repairs and help the buyers get their loan. Alas, that sale also fell through on the day of closing when the buyers didn’t get their loan. But I got my best photo of the year on that trip while walking along the bay, this shot of a very cooperative snowy egret. 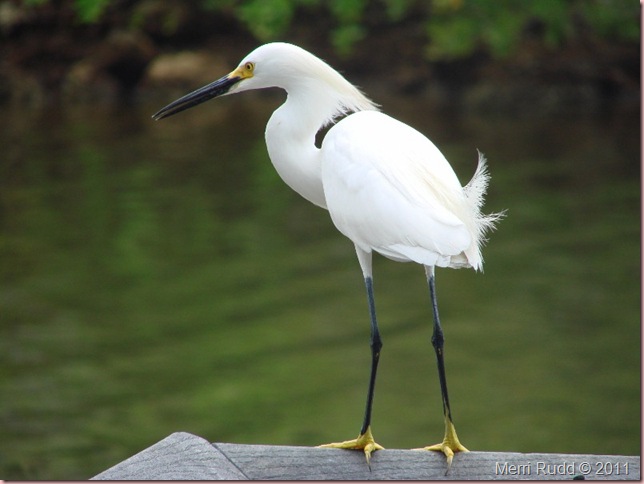 A few days later Mark and I celebrated our 20th wedding anniversary at a dog-friendly B&B in Taos, hiking at snow level each day and dining at very tasty restaurants by night. We’ve actually been a couple for almost 30 years, shocking, I know!

I decided to rehab the FL house and then relist it, so I made a trip to FL in June to oversee the rehab, spending 18 hours steaming wallpaper from the bathroom and kitchen and going to Home Depot with the awesome contractor every few days. All in all, I’ve made 14 trips to FL since my aunt’s diagnosis of metastases in April 2008. After the rehab was finished, I relisted the house, got yet another offer, and that one actually closed on August 26.  “Before and after” photos of the rehab are at:

In between all the FL fiascoes (I have written the first 700 words of my novel THE FLORIDA FIASCO), Mark, Luke and I camped in CO in late June with our friend Dave and his two dogs. Mark and I and Luke camped again in CO the end of July and beginning of August. We sold our old camper in an hour on craigslist after that trip (while it was still in decent shape) and sold the 16-year-old Toyota Tacoma truck too. We’ll look for another camper in 2012, but at least we don’t have to worry about storing the camper this winter.

So essentially my sabbatical started in September, since FL business ate up the first 8 months of it! Mark and I continued to hike each week. In September I flew to Houston with my Albuquerque friend for a second opinion about her upcoming double mastectomy for recurrent breast cancer (I am her health care power of attorney). The facility in TX was amazing, but we got the same advice from the doctor: do it sooner rather than later.

Our friends Robert Coontz and his beautiful bride Jolene Jesse visited us for a week in September, and we had fun playing tour guide, hiking, going to Taos, and to the hot air balloon fiesta. Robert introduced Mark and me 30 years ago. He and Jolene got married in 2010, so this was their first anniversary trip. They both declared it “their best trip ever!”

I called Boo Camp, a dance weekend in Jemez Springs, NM with the well-loved Privy Tippers from Tucson the end of October. You can view Peter Esherick’s Boo Camp Photos (click on a photo to get the large version, then use gray arrows to right and left of photos to move to next or previous photo) to see the merriment that ensued. My college friend “Big Bob” Chess, a former center on the Vanderbilt basketball team, visited in November. We enjoyed hiking, hearing a Czechoslovakian bluegrass band, and hanging out with him. A few weeks later our birding friends Melissa, Lew, Dave and Kathleen shared a fabulous Thanksgiving dinner with us. This week we all head down to Bosque del Apache Wildlife Refuge for our 9th annual birding/gourmet eating outing.

Mark and I had been planning a kitchen remodel of our own house for a long time. Destruction began November 30 and it was mostly finished last week (see Mark’s blog entry for details:  http://www.edgewiseblog.com/mjh/uncategorized/kitchen-remodeling-for-dummies/). We do LOVE the beautiful, functional results! Our contractors, Two Dads Construction, were great. The floating cork floor, cabinets made by a local guy (who lined up the grains of wood on the drawers), and engineered quartz counters are the stars. 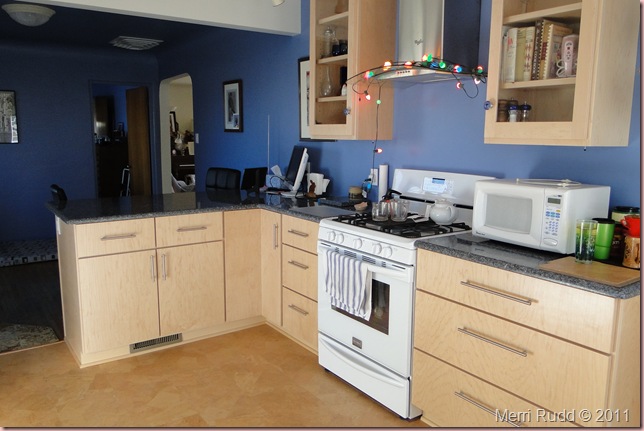 In December I celebrated my 20th anniversary as a dance caller by calling two dances in Albuquerque; one was affected by snow and ice, but the other was magical. In the middle of kitchen remodeling, my friend had her mastectomy and they sent her home 4 hours after she emerged from the 3-hour surgery! She was sitting at her dining table eating soup soon after, kind of hard to believe. She is doing great and the pathology indicates she is now cancer-free.

Mark, Luke and I spent Christmas day with our friends Kit and Mary in the south valley of Albuquerque. We hiked near the river, saw hawks, cranes, towhees, llamas, goats, and geese, then shared a fabulous meal of leg of lamb with tasty side dishes.

As 2011 wraps up, I am grateful for good family and friends, good music and dance, good food, and the natural beauty in the world all around us. I hope that 2012 is kind to us all and that the Mayan calendar merely signifies an evolution to more peaceful times. 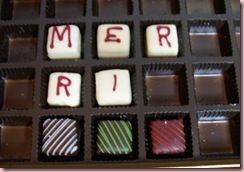